Governor Edmund G. Brown, Jr. announced today the appointment of David E. Driscoll to a judgeship in the San Bernardino Superior Court. He fills the vacancy of a new position created on September 18, 2017.

David E. Driscoll, 63, of Riverside, has been appointed to a judgeship in the San Bernardino County Superior Court. Driscoll has been an associate at Berman, Berman, Berman, Schneider and Lowary since 2017. He was a sole practitioner from 2004 to 2017. Driscoll was a partner and attorney at Driscoll and Reynolds from 1998 to 2004 and at Foster and Driscoll from 1991 to 1998. He was an associate at MacLachlan, Burford and Arias from 1986 to 1991 and at Pickell and Knudson from 1981 to 1986. He earned a Juris Doctor degree from the Western State University College of Law and an Associate of Applied Science degree from Barstow Community College. He fills the vacancy of a new position created on September 18, 2017. Driscoll is a Democrat.

“We are so pleased to welcome Judge Driscoll to our bench. He brings a wealth of knowledge, talent and experience”, said Acting Presiding Judge Michael A. Sachs.

For any additional questions, please contact the Court Executive Office at 909-708-8747. 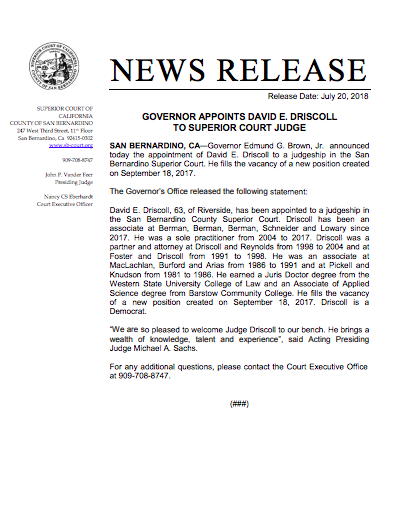 The Court will be closed Monday, January 18, 2021 for Martin Luther King Jr. Day