The Superior Court of California, County of San Bernardino is pleased to welcome Commissioner Susan Slater to the bench.

She took her oath of office this morning and will preside over a calendar at the Fontana Courthouse. Commissioner Slater was admitted to the State Bar of California in 1997 and has been a sole practitioner at the Law Office of Susan Slater since 2006. She was the managing attorney at Inland Counties Legal Services, Inc. in Rancho Cucamonga from 2003 to 2006 and a sole practitioner from 1997 to 2003. She served as Director of the High Desert Bar Association from 2012 to 2016 and as a member of the State Bar of California’s Committee on Administration of Justice.

In addition, Commissioner Slater served as a Temporary Judge for the Court, presiding over small claims and unlawful detainer cases at the Barstow, Rancho Cucamonga, and Victorville courthouses. Commissioner Slater earned a Juris Doctor degree from Western State College of Law and a Bachelor of Science of Laws degree also from Western State College of Law.

She fills the vacancy created by the retirement of Commissioner Diane I. Anderson. 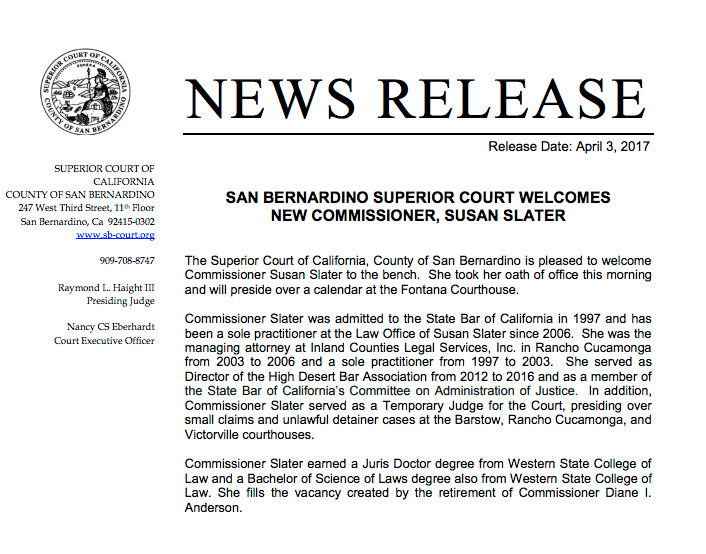